Get EXP-G-EP-TP Without Using Turns

Tested on the North American XBOX 360 and PS3 consoles. May not work on ASIA release. Does NOT work on the European release. Tested on Steam release.

In Slumber Forest you will encounter:

The first two Zones are really easy, so you might want to consider using the Steal Skill (Luana has this skill) to get more items. You can also attempt to Overkill the enemies here to have obtain even more Items. Selling the items might net you more G than the fight (easy to get Grass from the Thief, which can be sold for 50G each).

Taken from www.gamefaqs.com "the_blood_wolf" posted this tip to get a 400-Hit Combo as early as in Generation two which can be used for farming G and TP as well as unlocking some titles. Here is the link:

From "the_blood_wolf": "This is actually quite expensive and you need a good bit of TP to do this trick early, but it's not hard to do at all.

First you'll need to be in Gen. 2 at the Closed Forest. In this dungeon you'll find the recipe for the Skill "Rapid Move" (at the top part of the dungeon).

You'll also need the monsters for Title 98 Dreaming Wizard, which is to possess: 5 Feather of Pixy (from Pixy), 5 Grimoire (from Mage), 5 Proof of Sorcerer (from Red Mage), and 5 Poisonous Pollen (from Mandragora). Getting Title 98 will give you the recipe for Platinum weapons.

After you have the title, you'll need to accumulate (or have accumulated) 1,250 TP to buy Essential Arts XVI which will contain the skill Rush Beat. You'll need over 174,000G to buy/make six Rush Beat, Rapid Move, Rush (which combine to form the combo "Axel Rave"). Then you need to buy/make four Platinum Knuckles and one Platinum Gun. Granted the amount of Gold you need is high, but you can trade 25TP for a Vessel of Life which sells for 50,000G. Buy 10 of these first to collect the title for owning 10 Vessel of Life before selling them!

Once you have all the skills and weapons made, you need to catch 3 Werewolves or their lower form in Gen 1. I used Werewolves since they were higher level so they would hit the enemy.

Once you have all those put Borgnine, Winfield, Ellis/Vira-Lorr, and the 3 Werewolves in your party. Go back to the first Gen 1 Quest Area (to save your turn count and more easily accumulate combos). Equip Borgnine and the Werewolves with the Platinum Knuckles, Winfield with the Platinum Gun, and Ellis/Vira-Lorr with whatever. She just needs Impulse and another magic skill (I had two Impulse and Acension equipped). 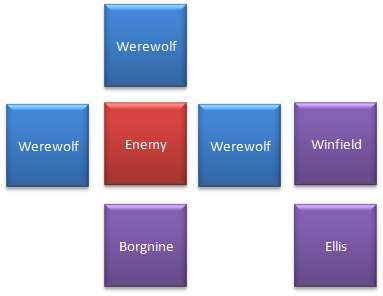 After you've done all that, get into a battle. Hopefully a Thief or Wolf is in the stage. Take out the rest of the enemies and leave just one of them left in the middle (or at least where four people can surround him). The battle grid should look like this:

Have your party just sit still for one or two turns so they have a full AP count and make sure all six of them are linked up. Have Ellis use Impulse twice to break the enemy's Break Gauge, and then jush chain the Axel Rave together (Rush + Rush Beat + Rapid Move). A broken Axel Rave does 72 hits, and you should be doing 6 of them, which is 72 x 6 = 432 hits from the combos."

While it is suggested this trick be used on lower-level mobs, doing so will result in a low rank (C or worse) that depletes much of the TP you would have made. By now, you should have a character with the second EX Skill. This character can kill all but the weakest enemy on the stage. This should allow the character to accrue around 100 SP minimum, allowing him/her to use the EX Skill. If not, let someone get killed, which will give a 25 SP boost to the rest of your team.

You want to first put the final enemy into Break status. The character (likely a mage such as Yayoi) not involved in the Axel Rave combo is the best for this. For example, Yayoi's second EX Skill can easily send the enemy into break, even on enemies with levels of 30+. On the rare occasion the skill doesn't, if her gear is leveled, Yayoi may have enough AP left over for an additional attack. This way, you get the full amount of TP you make, and possibly even a bonus amount above the standard.

This is a trick that is merely a combination of the two strategies above mixed with the auto-battling command.

Goal: This strategy is used to unlock titles while farming. What you are going to do is take 6 characters to a place where you can auto-battle infinitely without dying. You want to set your controller face-down, with the thumbstick pushed forward so that your character is running into some wall. Set up your auto-battle and leave your XBox. You will come back to having titles unlocked for having battled, killed monsters, dealt damage and landed combos, as well as for accumulating monster items and kills. Make sure your controller is plugged in so you don't worry about batteries.

Don't waste your money on DLC just because you get stuck! Use this trick and you will get not only levels and money, but items that will far surpass the armor you can get until generation 4. Also, many titles can be unlocked as early as generation 1!

General Tips before you start:

How to get monster kill/battle titles: Go to a place where you fight lots of monsters at once which can be killed QUICKLY.

How to maximize TP: I recommend 2-5 knuckle users and a healer, such as Borgnine, Ladius (mine uses knuckles), 3 werewolves and Ellis. This party is built to maximize your TP while auto-battling. You may be wondering, "Why have 5 knuckle users when only 4 can crowd an enemy?" Well, the AI will more effectively get you combos if you have more people using this strategy. Also, if you fight enemies that fill more than one square you can use all 5 characters.

How to maximize Gold: Go to a place where you can use the steal command effectively, and equip item drops (which can be made from breaking down lucky charms) on all of your characters. Also, make sure you are in a quest which drops items worth stealing. When you are done you could have 99 of each item, so be sure to find the best place. For example, if you just started generation 3 you could go back to the Closed Forest and farm fairy items, mysterious boxes and platinum ore. 99 of each would make you well over 250k for no work at all.

This "trick" can only be done once, in Silvi's solo battle event in 4th gen. Preparation:

On the first turn of battle cast Gospel on yourself. On the second turn, you'll have enough for Execution (Double Edge+Cross Edge+Square Cross), which will kill the Garvel and get you 900% bonus points for the A rank. The battle gives you 5,000 EP. With Gospel (x2 EP gain) and the battle bonus, you get 100,000 EP; enough to max-enhance every strongest weapon you have at that point.

There's a trick to be awesomely powerful in 5th gen by capturing monsters.

If you instead want to create the ATK +999 item:

If you plan to make both ATK +999 and MAG +900, Diyon Moor and Soraida Passage have both Ogres and Medusas, making it the fastest place to farm.

Alternatively, if you have access to the Boundary Plane, you can capture a Ring Dragon(Baubles) , which combies with a Greater Devil (Vinceburg Sea III) to form a Griffin.  You can also combine Angel Knight(Sympathy), with Wraith(Vinceburg Sea III) to create a Rafflesia.  This is the fastest method, as you don't have to use up precious fodder space.

Note: If you have Deep Forest Naruvia, you can get both the Ring Dragon and Greater Devil there, saving Turns.  The Angel Knight is there as well and you can find Wraiths in the Larohenga Deserts - no Turns!

If you have the Deep Forest Naruvia (DLC) Dungeon Map you can create a MAG +999 item:

Alternately, if you do not want to add Turns to your game try this:

You may need to try several times to create the dragons you want by starting the combinatin then cancelling if you get the wrong monster.  Also, Greater Devils are available in the first area of the Deep Forest Naruvia for the Blood Fang+ noted below.

A good weapon for melee monsters

To obtain this weapon you must capture a Greater Devil (which can be found at Vinceburg Sea III) and exchange it at the monster guild.

If you use a lot of alchemy, you might find a good mistake. Most people make silver swords but I prefer weapons that use monster drops. Making a Long Sword or Corseca gives better results; just get enough monster ingredients first, and then save your game. Next, fuse the items until you get a good mistake. Then you can save again after receiving a good mistake.

Another way is making the elemental alchemy. Simply buy the max amount of any of the elemental materials (such as the Body of Flame) from a vendor after you can purchase them. Save your game. Then go ahead and make lots of fast transmutes. Load and repeat as much as needed. Money is a lot easier to get your hand on than monster drops, especially if you're trying to keep your turn count low.

In the hidden dungeon Fenstermacher Plain, capture 2 White Dragons and 2 Ring Dragons. And on the world map immediately NW of Fair-Lart is Agonizing Badlands where you can capture a Living Dead.

Enhance Huge Mithril Claw for roughly 300-400K EP, depending on discounts gained, and convert for ATK+999

Go to Niege Snow Field (Solitary Frozen Tree) there you can fight both Ogre and Diabolos.

Community content is available under CC-BY-SA unless otherwise noted.
Advertisement